*Available via pre-order only. Stock arrives mid-May,
and will be sent out once it lands* 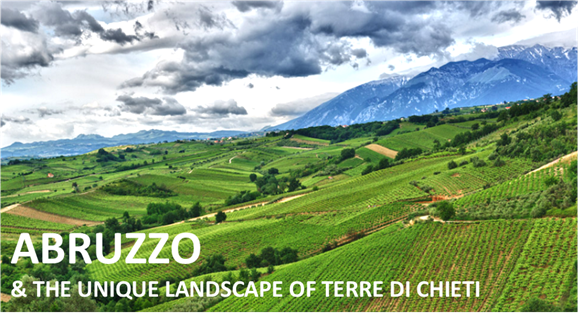 The Winery
Feudi Bizantini is still a relative newcomer to the Abruzzo fine wine scene, but one that's making a big impact early on in its life. Established only a few years ago in Crecchio, within the area of Terre dei Chieti, the winery's ethos is to showcase modern Abruzzo to a worldwide audience, using native grape varieties with new tech to compliment the natural attributes of each variety. To us then, it's no surprise that this wine in the store has already been awarded 'Italy's best wine' by famed critic Luca Maroni, for its new Montepulciano d'Abruzzo 'Il Rabdomante', which also received 98pt from maroni, the highest score he gave this year. You might be aware that Maroni has dedicated a lifetime to becoming a top Italian reviewer, and his annual publication I Migliori Vini Italiani is one of the most trusted throughout Italy.

The Land
The winning wine is still only in its first vintage. Named Il Rabdomante after the single vineyard on which the wine is based, it is the selection of the estate's best Montepulciano fruit at one of the highest points in the town of Crecchio. This cru was chosen by the winery for its steep, Southern exposure at the top of one of the hills within the area. The unique position of the vineyard allows it to benefit from the sea and mountain breezes, producing a wine that's full in body and very representative of the characteristics of the area. The vineyard has limestone rich soil, with a light base of clay and sand and the proximity to the Gran Sasso mountain range, and the altitude of the estate itself, create wide differences in day and night temperatures. The grapes that are grown here take advantage of constant cool breezes which ensure good ventilation and minimise humidity, ideal for the development of grape aromatics and complexity without sacrificing balance, fine acidity and tightly wound tannin.

The Wine
The Montepulciano from here is unique, quite unlike many of the larger co-operative produced wines from the same variety. They carry a deftness, and are defined by their leather, cured meat and spice characters rather than overt fruit. A fascinating base on which to build Italy's best wine of the year. The winery also produces a wonderful series of wines labelled 'Ikonia', both Pecorino and an unoaked Montepulciano from the same province in the captivating corner of Italy.

So the "Best wine of the year" is a Montepulciano from Abruzzo. Of course such accolades should always be taken with a pinch of salt, but there's no hiding the impact that this variety is having on the Italian and international press and consumers alike. Il Rabdomante is about body, structure and ageability, using the best, ripest parcels of fruit from this incredible vineyard and crafting a wine of power without sacrificing balance or structure. A tour-de-force.
Dried flowers, spice, liquorice and maraschino dominate the nose, along with hints of dried herbs and cigar box. The palate is about compact black fruits, with a good balance of fine-grained oak tannin and still the typical gamey, meaty chew that's so typical of great Monty. Length, breadth and opulence are the hallmarks of this, Luca Maroni's Best Wine of the Year. Age until 2025

Il Rabdomante is coming to Australia in extremely limited quantities, and as such will be sold on a Pre-Order Basis. Please get in touch using my contact details below if you would like to reserve some of Luca Maroni's "Best Wine of the Year"